Chakib Benkara, Co Founder Cotswold Art Academy. Drawing Techniques.
His art interest began in Oran, Algeria at the age of 14, growing up surrounded by the vibrancy of colours and cultural diversity of North Africa, his creativity was stimulated by the world around him.
He is an artist painter, sculptor and photographer.
“I have always used the three different mediums to express my feelings towards life and it’s surroundings”
“I can’t hide behind lights and technology, I am reliant on a Nikon camera, patience and lots of optimism, but what I get in return is the chance to make an honest picture which people know immediately is a genuine moment and which hopefully burrows deep into their memories”.
“I achieve my unique style of part- defined, part- abstract by applying oil and plaster to canvas. Usually applied with
palette knifes and fingers”. 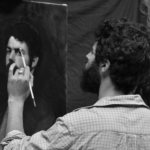 Nicholas Chaundy, Fine Artist. Drawing.
Nicholas first studied at Central St Martins where he received his Foundation Diploma in Fine Arts. He then moved to Falmouth, Cornwall to study Fine Arts at Falmouth University where, after three years, he received his Bachelor of Arts.
Nicholas has also been trained at The Florence Academy of Art where he was taught academic traditions and techniques of drawing and painting in portraiture, figurative and still life works. Nicholas received a scholarship whilst being at the academy and completed the three year program in just over two years.
Now back in the UK, he works as a commissioned portrait and figurative painter. 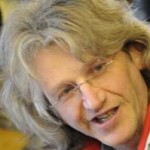 Neil Alcock, Fine Artist. Pottery.
Back in the UK, I worked with Russell Collins at the Hook Norton Pottery, Jim Keelrig at the Whichford Pottery, John Huggins at the Ruardean Garden Pottery and John Jelfs at the Cotswold Pottery.
Since August 1998 I’ve worked in my own studio, the Vineyard Pottery, near Winchcombe.
The major influences on my work are English potters and shapes and Japanese potters, shapes and glazes.
The pots are stoneware, fired to 1300 °C, and are all oven, microwave and dishwasher safe. I use three main glazes:
tenmoku (black/brown/rust), chun (light blue/grey) and a blue made from my own recipe. Other glazes in different colors can also be made and used.
I also work in schools and with groups of brownies, guides and scouts. I offer lessons and give talks, demonstrations and workshops away from the studio. 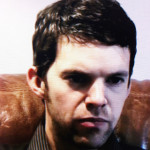 Darren Baker, Royal Fine Artist. Portraiture.
2012 is proving a momentous year for Darren Baker. With projects relating to the Queen’s Diamond jubilee and
his role as official Olympic artist, plus numerous other prestigious commissions.
As well as some gorgeous new original works and limited editions, Darren’s Leeds exhibition included a one day only exclusive unveiling of his portrait of Her Majesty The Queen. The picture will next be on public display in May as part of a major exhibition by the National Portrait Gallery to mark the Diamond Jubilee. Her Royal Highness The Queen: “Art and Image will feature more than sixty significant portraits taken by the world’s leading artists and photographers”.
Darren’s membership of the elite group of artists who have been granted the honour of painting an official portrait
of Her Majesty has led to the BBC teaming him with another member, Rolf Harris, for a forthcoming jubilee programme where the pair will be taking their paints and brushes on to streets! Darren expects filming to begin in May and is looking forward to working with Rolf. This presents a new departure for Darren but he is far too busy to be nervous. 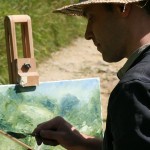 Rupert Aker, Fine Artist. Oil Painting.
Landscape painter, based in the Cotswold’s.
He walks the local valleys and hills, gaining his inspiration from the woods, meadows and hedgerow, painting in plain air when possible.
His aim is to capture the effects of the light on the land though the medium of oil paint using palette knife and fingers.
His an artist that sells direct to the public through pop-up exhibitions in the locations where the works were painted.
“My painting field days aim to give participants the opportunity to create a response to the landscape around them, preferably outside in the raw, beautiful nature”.
Palette knife and oils allow you to work quickly and expressively, so this is not about capturing every last detail. Hopefully we will create an emotional response through painting – whether it be a sense of peace and calm or drama and energy: evening light and shadows; cow parsley and hogweed on a wayside verge; water and reflections; mist, evaporation and sunshine after a rain storm; the gloaming; a church spire providing a focal point in the landscape…